The Best Guitarist I Ever Saw 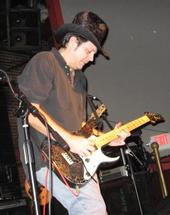 This guy was playing in Boots Randolph's place in the eighties. Chet Atkins was quoted as saying "he's the best there is" (wow) I was on the program for several years at the Music City Youth and Family Conference, held in Goodletsville, TN from 1979 to 1984. That is where I experienced the greatness of Tommy Jones.

I have attended concerts, watched videos, viewed live television performances which have knocked my socks off. But nothing compares to the first time I heard Tommy play. Better, Tommy "interact" with the guitar.

He was playing a Martin acoustic, with plastic strings on the high register. It was mind numbing. Sound he achieved rivaled modern effects, yet he was just playing through a stand held mic.

Every finger had its own job. I counted five melodies in harmony on several of his songs, which resembled a stringed quintet much of the time. (It seemed at times I heard six, and now deduce that the sixth was the combination of the other five coming together as one)

The songs he played were not relevant. It was what they sounded like. I will never forget it, and how it still makes me feel.

Join in and write your own page! It's easy to do. How? Simply click here to return to Your Guitar Hero.