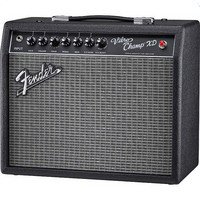 This is the claim of Gibson writer Dave Hunter, who this week listed ten famous musicians who have achieved massive things with just a small amount of wattage.

Fender amps appeared the most on the list, with many of the guitarists mentioned - including Beck, Gibbons, Joe Walsh and Eric Clapton - utilising tweed Fender Champs.

Explaining how these musicians were able to do so well with such relatively low-power equipment, Mr Hunter commented: "One of the best ways to get a huge-sounding guitar track is to stick a good mic in front of a small tube amp and crank the thing up."

The five-watt Fender Champ line ran for more than 40 years until it ended in 1982. It made a reappearance in 2006 as a member of the Vintage Modified range.